My 6 yr old son is on day 6. We have had a good experience with minimal pain. Here is our story: Our Tonsillectomy Story:
I think I have read everything on the internet about tonsillectomy’s. I noticed that there are not that many recent or good experience stories, so here is our story. My 6 yr old son had his tonsillectomy under private care in the United Kingdom 28 May 2015. Long story short, but after a few paperwork mix ups with the NHS we decided to go private and pay. It worked well for us, private room, private nurse and we picked the date during half term so that he missed less school. We did have two NHS consultants recommend the procedure so I was fairly confident that he needed it.
He has always had issues with his throat and snoring. He missed 6 weeks of school in reception, and has had around 14 cases of tonsillitis in his life. We schedule the date and then I started trolling the internet for information. I was as prepared as I could be for it. A few weeks before the date I started telling his what to expect. I did not want anything to be a surprise to him. He knew about the magic cream on the hands, the tube that would go in his hand to make him go to sleep, that mummy and daddy would be there when he fell asleep and the nurses would come and get us when he woke up. He knew they would remove his tonsils and that it would hurt. But it would probably stop his throat from getting infected again. I told him that he must drink and take is medicine no matter how much it hurt and that he could eat whatever he wanted. He also knew that he would need to stay in the hospital for at least 6 hours after the operation. (a fact he forgot after a bad wake up from general) 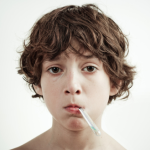 I also was very prepared at home. I had made a ‘bed’ for him on the floor of our room so I could keep an eye on him during the nights and make it easier to give meds. I was fully stocked with calpol and nurofen. I had the humidifier out (a must in my mind!) I had bought every food he likes in double and packed a bag of snacks to take with us to the hospital both for him and us. He is a very picky eater so I wanted to be prepared if he did not like anything they had to offer. I had bought 14 gifts, one for each day, most from the pound store but some bigger ones. And had a new Lego set for the hospital that really helped the time pass when all he wanted to do was go home. My daughter spent the night before and day of with my in laws. In short, I was prepared. It was my way of dealing with the anxiety of what was to come. I had read many horror stories and I also had my tonsils out at age 15 and had bleed badly on day 3. I was a nervous wreck, but at least I was prepared!!
We arrived at the hospital at 730 am. He could not have anything to eat from the evening before and only a drink of water at 630 when he woke up. We were second to go down to theatre. We walked him down and kept him talking while they tried to get the ‘tube’ in. They couldn’t on his right hand, asked if he wanted to blow the balloon he said no, so they tried the other hand. It worked. It was very peaceful, but they did warn us that he may cough as he goes down. In our case he did not. About 45 minutes later the doctor came to tell us everything went well and he was in recovery. He did say that there was some old festering infections in both his tonsils, with his left one draining a lot of smelly drainage after he cut in. It was a good thing we decided to have them out because he was most likely fighting a low grade infection daily for a while. Because of the drainage he would be going home on antibiotics. The nurse came about 15 minutes after that and said we could come and see him in recovery. He did not wake well from the general. He was very aggressive. So please be prepared for this! He is normally a quiet, sensitive boy.

For about 3 hours he was yelling, thrashing about, and trying to go home. I had prepared myself for this so both my husband and I just held his hand and waited for it to pass. The nurses came every 15 minutes for the first hour checking his oxygen saturation on his finger and taking his temp. Then every 30 minutes until we went home. We were sent home with antibiotics to give 3 times a day, nurofen 3 times a day and calpol 4 times a day. They gave me a schedule of meds that did not have me waking him in the night, to be kind to me. After everything I have read, I decided to change it so that he would be getting meds every 4 hours round the clock. It has worked very well for us. After he settled, he ordered pasta and ate the whole bowl. Luckily I had brought snack as well as he then had a bag of crisps, cracker, hula hoops and a donut. We were discharged at 5 pm and went home. He was sore and a bit pale with dark circles under his eyes, but in good spirits. He ate a melted cheese sandwich and crisps for dinner, had his meds, and went to bed in our room. He slept through the night other than the two times I woke him for meds. I did not sleep much because I was too worried about him and possible bleeds.

He woke on day one at 6 am, in pain, but not too bad. I was prepared for the worse, but honestly is was not as bad as a case of tonsillitis. He wanted a few baths during the day as they made him feel better. He ate and drank and took his meds. We played a lot of board games because for some reason he did not want to watch TV. Day 2, 3 and 4 are much the same. I had a hard time not letting him run around. We did play in the garden a little. I did not let him run or play on the trampoline, which caused a few tears from him. Still giving medicine round the clock. He is sleeping well but very ‘congested’ when lying flat in bed. Must be the mucus draining from the wounds. I did read that this happens but he sounds like darth vader when sleeping flat. So I wake a few more times in the night to prop him up with pillows and that really helps. Oh, forgot to say from day one, he is sleeping so quiet. From birth I could always hear him breathing in his sleep from anywhere in the house. I find myself waking in a panic because I cannot hear him breath.
We are now on day five. Still doing great! He wakes with a sore throat and cheek (which I think is his way of saying jaw pain). Yesterday, I forgot to give medicine a few times. Before he would start to decline and want to take a bath or sit on the sofa so I would know it is time to take meds. That did not happen yesterday. I think I will spread the meds out a bit more today to see how he does. I will still give meds tonight, but possibly the last night if everything continues so well. I still have it in the back of my mind that there might be a bleed when the scabs fall off. I have looking in his throat this morning and the scabs are getting smaller. Probably because he is eating so well he is slowly washing away the scabs. Yesterday (day 4) we even walked down to the shops to buy a magazine. He was bouncing off the walls and I think needed a walk or would end up getting up to no good. We took the long way home to burn off a bit more energy.
I will update later. Hopefully this post has helped. I am aware that this operation can have a very difficult recovery. But, so far for us it has been a good experience. My words of advice are to be prepared, prepared, prepared. Prepare for the worst case scenario and hopefully it will be better than that. If it is bad, at least you are ready for it. I can already see a huge difference in my son!